A common pattern in Android layouts is where we need to visually group a collection of views together, and the visual indicator of that grouping is a common background which wraps those views. Normally we would achieve this by using a ViewGroup to which the background is applied, set its android:layout_[width|height]="wrap_content", and add the views we wish to group as children. The downside of this is that nested layouts can be expensive during the layout pass, and they also make using TransitionManager a little harder, so current best practice is to keep layouts as flat as possible. ConstraintLayout allows us to do this with no nesting - keeping the background and all of the children we wish to visually group as immediate children of the ConstraintLayout.

There are a couple of important principles that we need to be aware of. Firstly (apart from some cases when animating) Android will draw views in the order in which they appear within the layout DOM. So if we occupy the same space with two separate views, the one which appears last in the layout DOM will be drawn on top of the one which appears first.

The second principle is concerning view IDs. A view ID is first declared in the layout by using the + prefix to the id resource type: @+id/background. This does not have to be an attribute of the view which it identifies. In other words it is possible for a view to reference another view which appears later in the layout provided it uses the + prefix in the id reference. That ensures that the id will be created if it does not already exist.

These two principles are true of all Android layouts, not just ConstraintLayout, but they are key to understanding how this technique works.

Creating a background in the editor

To create a visual background for a group of views, we must first create a simple View object to which we apply the background colour or drawable in the android:background attribute (adding this before the other views will cause it to be drawn behind the others). It is worth giving this some fixed dimensions initially otherwise it will be difficult to manipulate later - we’ll change these as we go. Next add the views that we wish to visually group together, and add the necessary constraints to position them correctly but do not constrain anything to the background view that we just created. Once they are in position, we can now constrain the background view to the positions of visual children (i.e. the Views which will appear to be child Views of the background View).

It is actually quite difficult to see these constraints if we do them all at once, so let’s look at them side by side and focus on how we constrain the verticals of the background view (on the right) to the visual children (on the left):

There is a really important thing to note here: When we first create the constraint, a default android:layout_marginTop='8dp' is applied to the background view. As a result of this, the top edge is 8dp lower than the top edge of the view that we’re constraining it to. If we consider the expected behaviour if we were to constrain the background to the parent, then this makes perfect sense. However, as we shall see very shortly, we need to properly understand how margins will affect the background view. For now we set the margin to 0dp to get it to align to the top of the view that we’re constraining it to.

Next we must apply exactly the same technique to the horizontal constraints and we can get the background view to appear as though it were a parent ViewGroup set to wrap_content: 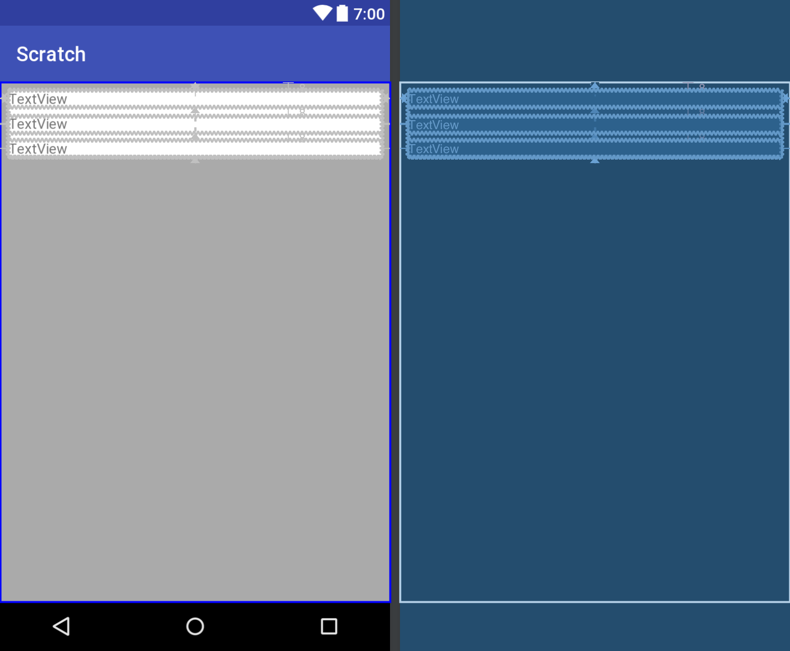 Although there are some concepts that we need to understand in order to achieve this effect, the XML is actually quite straightforward once we understand them: