The fundamental building block of ConstraintLayout is creating constraints. A constraint defines a relationship between two widgets in the layout and controls how those widgets will be positioned within the layout. For those new to ConstraintLayout, but familiar with RelativeLayout the basic principles of how constraints work are very similar to how we create relationships between widgets in RelativeLayout.

Creating constraints in the editor

The easiest way to learn how to create constraints is using the visual editor in Android Studio. All of the examples here will show how the blueprint view represents things. Let’s start by looking at a simple TextView in the blueprint view:

The TextView should be fairly obvious, and the two arrows show some existing constraints on this TextView which align the left and top edges to the parent ConstraintLayout. We’ll look at how to create them in a little while. We can also see the 16dp margins which will add some space between the parent ConstraintLayout and the bounds of the TextView. If we select the TextView we will see the sizing and anchor points: 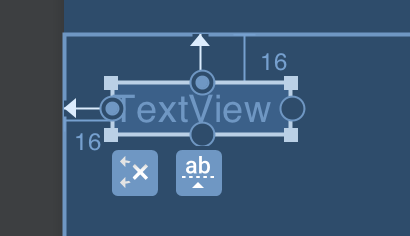 The squares on the corners are the size handles and we can drag these to resize the TextView. These are not as useful as they may first appear because using them will result in a fixed size of the TextView and we will normally want the TextView to be sized responsively in some way.

Any View which subclasses TextView will also have an additional type of anchor point: the baseline. This enables us to align the baseline of the text in the TextView as well. We can view this by clicking the ‘ab’ button below the TextView: 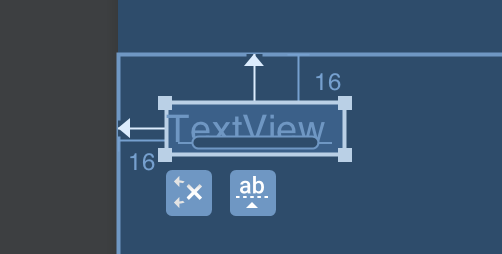 The sausage-like shape is the baseline anchor point and we can create constraints from this in exactly the same way as we are about to see with the four edge anchor points.

The other button below the TextView (the one containing the ‘x’) will remove all constraints. 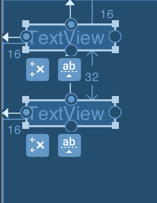 Now that we know how to create a constraint between Views how do we go about creating a constraint to the parent layout itself? That is simply a case of dragging the anchor point to the appropriate edge of the parent:

For those who like to understand what’s going on under the bonnet/hood, then the XML for that layout is:

The constraints are the attributes which begin with app:layout_constraint. We can see those on all child views of the ConstraintLayout, positioning them relative to the parent. You will also notice that textView2 specifies a constraint that the top of the view should be positioned relative to the bottom of textView.

It is worth noting that these are in the app namespace because ConstraintLayout is imported as a library so, like the support libraries, it becomes part of your app rather than the Android framework (which uses the android namespace).