Sometimes we need to create views which have a fixed aspect ratio. This is particularly useful with ImageView if we need to display images which come from a feed, and we know that any images we get will be of a specific aspect ratio. For example we may have book cover art (the specifics of which can vary enormously, so we’ll leave it there!); or movie posters (which are commonly 4:6); or perhaps stills from movies (commonly 1.85:1 or 2.39:1) or tv (commonly 4:3 or 16:9).

If our images are guaranteed to all be precisely the same aspect ratio and physical size then we can simply use wrap_content in both dimensions and the job is done. However, in the real world often there are minor variations - usually due to mathematical rounding. If we have an image in isolation this is not usually a problem, but if we are displaying multiple images then small differences in size can have knock on effects and other views which are aligned to the images echo those differences. Even minor discrepancies can make a layout look unbalanced.

One solution to this is to subclass ImageView and override onMeasure() to apply a fixed aspect ratio. More recently PercentLayout (which is available as a support library) provides a mechanism to fix the aspect ratio of a child view.

ConstraintLayout also provides a mechanism for fixing the aspect ratio of a child view. Select the child view that we want to control, and then set the ratio value (circled): 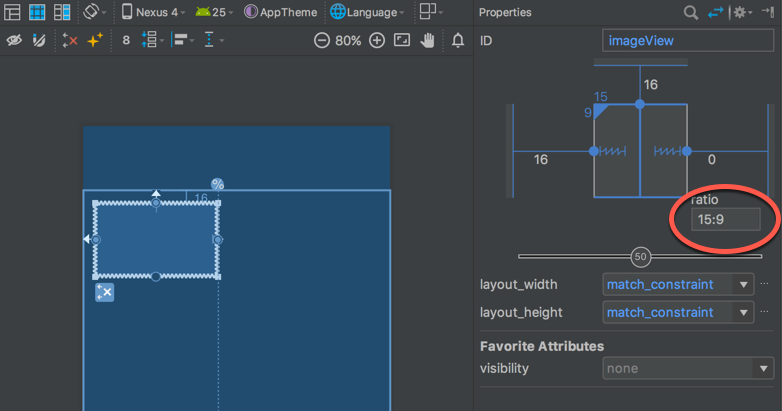 The view that we’ve applied this to is constrained to the top and start edges of the parent ConstraintLayout - I will refer to start rather than left to be friendly towards right-to-left languages. The end edge is constrained to a guideline, and the bottom edge is unconstrained. Both layout_width and layout_height are set to match_constraint meaning that they will match any constraints that are set. The width of this view will be determined during the layout pass, but the height looks to be indeterminate. However, because of the ratio value, the height can be determined as a function of the width (in the example this is 15:9).

The result of this is that if the width of the view changes then so will the height. We can demonstrate this by moving the guideline that the end edge is constrained to:

The XML for this is:

The aspect ratio of the view is set using the app:layout_constraintDimensionRatio attribute. This has two components: an orientation, and the ratio.

The editor has inferred that the width is the input to the function and has therefore given the orientation of h for horizontal. The orientation can be omitted and it will be inferred during the layout pass, but it can be useful to explicitly set an orientation if we wish to avoid any possible ambiguity. In most cases this is superfluous because the orientation is implicit - in our example the height is indeterminate, so it is easy to infer that it is a function of the width.

The ratio component is pretty self-explanatory as it is the aspect ratio that will be applied.

The only other thing worth mentioning is how match_constraint (which we saw earlier on the layout_[width|height] attributes) is actually represented in XML: 0dp. This behaves in a similar manner to weighted LinearLayout where we would specify 0dp and allow the size to be determined by the parent layout during the layout pass.